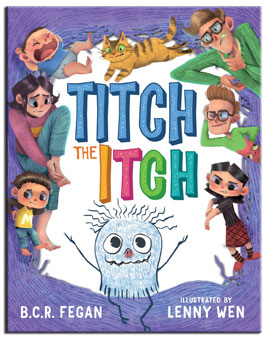 Titch is an itch who just wants to be wanted.

When Titch discovers that no one in his family wants him, he sets off on a journey to find someone – anyone – who would be willing to live with an itch. With every step he grows less hopeful. That is, until he meets an old friend.

“Titch the Itch is a humorous adventure in friendship with some unexpectedly twisted comedic elements.” – Foreword Clarion Reviews

“B.C.R. Fegan’s story of the needy little itch just looking for friendship is a sweet tale perfect for teaching young readers about the value of friends and loyalty.” – Literary Titan

Titch was an itch – but not just any itch, mind you. He wasn’t a mosquito-bite itch or a tickly itch. Titch was a no-reason-at-all itch. You know, the kind of itch that comes from nowhere. The kind of itch that just gets itchier the more you try to ignore it. Well, that was Titch – and he loved to make friends!

The only problem for Titch was that nobody wanted him around. For the past few months, he had been living in a large house with a large family, but no matter how many times he had crawled up to someone in the family, they had very quickly scratched him away.

Making new friends can be exciting, but when you’re an itch, it can get a little complicated. Titch has been living with a large family for the last few months who all seem super-nice. Unfortunately for Titch, he doesn’t understand why this super-nice family aren’t interested in being his friend.

Eventually the father makes it clear that Titch isn’t wanted.

Reluctantly, Titch decides that it is time to move on and tries desperately to make friends with a number of animals and people on his journey to friendship. Each time however he grows less hopeful as his itchiness continues to be something they all desperately seek to avoid.

When Titch learns that one of the family members has been in a series of accidents with all the animals and people he sought to befriend, he immediately sees an opportunity to show them what a true friend looks like. To the despair of the family member, Titch decides to stay with them until they are better. Surely then, they would see that living with an itch isn’t all that bad.