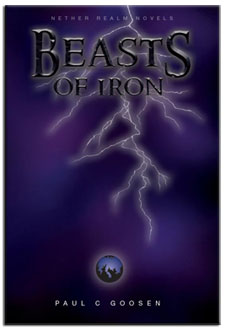 “There is still time to turn back”

There is a realm ruled by the beast, and survived by man. A realm of contest between myth and mortal. A realm where beauty and monstrosity are matters of opinion. Welcome to Earth … or what’s left of it.

Brent, a troubled young boy, flees the cruel treatments of his village, just before it’s destruction by an army from the war torn past. Taken on a dangerous journey by a mysterious youth, Brent learns the terrifying truth of why his village was destroyed, and why everyone around him may meet the same fate.

Brent, a troubled thirteen-year-old boy, has fled the cruel treatments of his isolated and unusually cruel home village, just moments before a titanic metal animal destroyed it under the direction of the Techs; An assembly of armour-clad warriors, obsessed with the resurrection of machines from the war torn past.

Rescued by a mysterious teenager called Verule, he is taken to the Sanctuary – a village in distant and treacherous woods. Brent soon discovers that he is not a normal person; He is a Zai – a person with the ability to control a powerful natural element, and he is not the only one.

Overhearing plans of a secret quest to leave the borders of the Sanctuary lands and warn the outside clans of the Tech’s newest weapon, Brent convinces Verule to take him along. And so a small group sets out with Angie, a high and mighty Zai with the ability to heal most injuries; Darvon, a Zai come warrior with a bad temper and an uncontrolled talent for attracting the worst luck; and Haider, a prince determined to prove himself worthy of his succession before his father succeeds in murdering him.

The mission takes the characters to far places beautiful and dangerous, allowing Brent to meet some of the many clans formed since the continental merge, including the Homies, the Surfies, Techs, Skydrolock, Goths and bounty-hunters as well as some of the Nether Realm’s thriving anti-human fauna.